MeL Shows How to Evaluate a Speech

Kelly brought the meeting to order to stating the mission of the club. I think it has something to do with making people feel horrible about themselves, turning into shut-ins, and dying alone with two tons of unread newspapers. Or maybe the opposite.

The mission of our Noon Toastmasters club is to provide a mutually supportive and positive learning environment. We offer every member the opportunity to develop communication and leadership skills, which in turn foster self-confidence and personal growth.

She then turned the meeting over to our president MeL who exudes self-confidence and the openness that is so critical for personal growth.

(You know, the problem with using sarcasm is that people think you are using it when you aren’t. Just assume when I am talking about people, I’m not being sarcastic. The truth is, I’m a very nice guy. Or at least I like to think of myself as a nice guy. I can see how there might be some confusion on the matter.)

We had a few absences so MeL got our guest Thea Daniels to give the second speech. More on that shortly.

A recent change for Noon Toastmaster is the physical make-up of our room, which makes setting up the meeting much easier.

We are going to have an open house Toastmasters meeting on 30 Oct. This is easy to remember because it is the 5th Tuesday of the month. It’s really important because we could use some fresh blood in the group. So if you can help out, we are in need of people to fill many positions like Toastmaster. Let’s do it for the group.

Gimme an N! Gimme an O! Gimme another O! Gimme a final N! What’s that spell?!

Brian was Toastmaster for the day. He did his own thought of the day and asked a number of insightful question:

Just in case you have children who might ask you such questions, I’ve provided answers for each of these seemingly intractable questions. But just because I know you are dying to find out: dog food companies maintain dogs for taste-testing.

Word of the Day: Mentor

The word of the day was “mentor” which is “a trusted counselor or guide or tutor or coach.” Some of the responses:

Then it was time for the speakers. The first was me, “Why You Should Read Don Quixote.” It’s part of my Dynamic Leadership path. The truth is, I waited until the last minute to write the speech, which was fine. But that meant that I didn’t practice it much. That’s a good thing, however, because I’m supposed to take the input I received and use it to rework the speech. I’m looking forward to that.

The biggest criticism of my talk was not my excessive use of “uh” but rather that I don’t speak loud enough. Listening to my recording of the meeting proved that to be the case. I could barely hear me. But that was fine given I don’t have to be reminded of what I said.

What was Elvis Presley’s last top-10 single on the Billboard Hot 100? The first person to tell me wins a dollar!

The next speaker was Thea Daniels who spoke on how Toastmasters has helped her push herself out into the world. This resonated a lot for me. I use Toastmasters all the time to force myself to do things I don’t want to. I see it as Toastmasters homework. So even if I make a total fool of myself, I can justify it to myself as a part of my attempts at self-improvement.

Also of interested is what a great talk she gave without preparation. It was inspiring.

Brian took back over as the Toastmaster. He introduced the General Evaluator, which was himself due to absence. He introduced Steve to evaluate for my speech, which seemed to come as a shock to him.

Steve’s comments turned into a kind of dialog. But he did note that I could speak a little louder. I’M TRYING. REALLY!

Brian discussed Thea’s speech. He noted how well it was structured.

Next was Anna as Grammarian. She noted some phrases that she liked:

Bert was the Ah Counter. He noted that nothing was really worth noting other than the ah firework display of my speech.

Brian said that he liked the new set-up. The group seemed to agree with that assessment.

After going over the opening positions for the next meeting, Brian turned the meeting back over to MeL.

MeL reminded everyone to let the group know if they are not going to be able to attend the meeting. And she thanked Thea for stepping up and helping us out at the meeting.

Remember: if you haven’t paid your membership dues, please do. They are over-do. We are currently in the grace period. 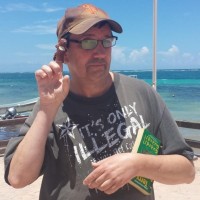